One To One / Piggy Back Driving Lessons 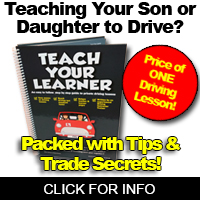 Intesive Driving Courses are a great way to get a lot of Driving Lessons experience in a short space of time. Although they don't guarantee a driving licence, they can dramatically bring down the amount of time it takes a learner to get to test standard...

How many driving lessons will I need?

How do I find a good Driving Instructor?

What will I have to do on the Pass Plus course?

How long does it take to get a provisional driving licence?

Why are there trainee Driving Instructors?

How much should driving lessons cost?

Is it better to take an intensive driving course than 1 hour driving lessons?

What should I ask the Driving Instructor before I pay for my lessons?

Do I have to learn the highway code?

Do I have to take the Pass Plus course?

How do I get a provisional driving licence?

Is there a test at the end of the Pass Plus course?

Will I pass the driving test after an intensive driving course?

Can I start taking driving lessons before I pass the theory test?

My Dad wants to teach me to drive - will I be able to take the test?

Insist on one to one driving lessons - Say no to 'piggy backing'! 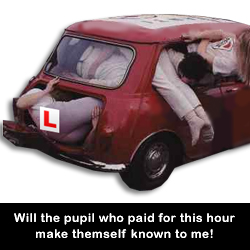 'Piggy backing' used to be seen as part and parcel of driving lessons years back.

However, over the years it has gradually faded away due to improved instructor training which has lead to better quality services being provided by driving schools.

Unfortunately, it hasn't disappeared completely and some driving instructors continue to piggy back pupils.

If you don't know, 'piggy backing' means: picking up a pupil for their driving lesson with the pupil from the previous driving lesson still in the car. Then, the first part of the lesson consists of taking the previous pupil back to their drop-off point.

Driving instructors that use this technique will have plenty of excuses as to why it doesn't matter, or even why it's a good idea. But, the reality is, it's about making more money at the expense of lesson quality.

When an instructor uses the current pupil's driving lesson to take the previous pupil back to their house, they are essentially creating extra time and money. This is because they are eliminating the unpaid, 'non-lesson' time taken up when driving between pupil pick up points.

However, the truth is that a pupil who has paid for a 1 hour driving lesson should expect exactly that - an hour long lesson focusing on their syllabus.

Put another way, if your lesson is 'roundabouts', it's going to be tricky for the instructor to incorporate and teach that subject whilst thinking about the quickest way to get the previous pupil back to their drop off point.

They might say there are roundabouts on the way, but it doesn't take away from the fact that there is an ulterior motive behind the drive which ultimately means, until the previous pupil is out of the car, 100% focus is not being given to the current pupil.

It becomes even more obvious that lesson time is being wasted if you are expecting to learn a manoeuvre. Put simply, you are taking time out of your lesson to drop the last pupil off when you should be learning and practicing.

There should not be 10 minute drive to the last pupil's house which is thinly disguised as part of your driving lesson. At the very least, the presence of a stranger sitting in the back of the car changes the atmosphere and the dynamics of the lesson.

Because driving instruction is mostly a solitary career, it's easy for instructors to use piggy backing. In fact, we have had pupils from all the major driving schools tell us it was happening in their lessons. It's fair to say that this will be a choice made by the individual instructor, not the school and may well be happening without their knowedge.

Happily, one to one driving lessons are seen by most driving schools as a good selling point, which means pupils are much less likely to experience piggy backing these days.

However, it does go on and if you are concerned about it, the first thing to do is to ask up front before booking your driving lessons. Any good driving instructor will be happy to clearly explain their policy.

If you're already having driving lessons where piggy backing is happening, you have the right to ask for one to one lessons and of course, the right to move elsewhere if you aren't happy.

If you don't want to ask your driving instructor outright, you could always say that you're not confident with someone else sitting in the back of the car and it's effecting your ability to learn.

In summary: piggy backing is not an acceptable part of driving instruction - whatever the reasons given! Insist on one to one driving lessons and make it clear that it's what you are paying for.